Saying Goodbye to The Monstrumologist Series and a Godbomb

Hi all in the Land-o-Blog. I have yet again been away for awhile, The wandering, master-less Ronin Librarian Bill. The Holidays are upon us and I hope you all had a great Christmas, Hanukkah or whatever Holidays you follow!!!! I truly had a blessed one indeed. Yet, enough of this as we talk books. GNs and such. So here we go!!!! 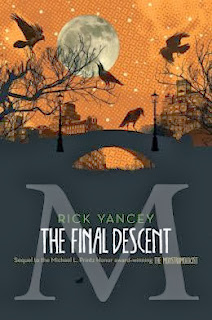 The Final Descent (from The Monstrumologist Series) by Rick Yancey - Well all good things must come to an end and Mr. Yancey did so with the forth and last book in this series (I said I wasn't gonna cry, I said I wasn't gonna cry). Before I start I want to say this series has been outstanding for both older teens and adults. I know this series had a tough time finding a following, which makes me sad, but if you want to read a series that is exciting, full of intrigue, love, hate, growth an change and about the human condition without flinching from hard truths (with a strong dose of the macabre), this series is definitely for you.

The story starts switching between time frames and ties up the relationship of Will Henry and the great Monstrumologist Dr. Walthrop among other characters associated with the series. Dr. Walthrop is again on the hunt for a last of it's kind, aberrant life form called T. Cerrejonensis. A dangerous snake like creature thought to be extinct for 100 years. It's poison so deadly it causes agonizing death, yet if said poison is handled correctly can be made into a powerful drug that causes feelings of euphoria but is deadly addictive.

We get to see Will Henry as a older teen and as an adult. Unfortunately Will Henry has become more cynical or perhaps you could say realistic about the dirty work that comes along with the field of Mostrumology (indeed he starts to remind us more and more of one Jack Kearns in his views - however not in Kearns' twisted extracurricular activities, can you say Jack The Ripper)) and Dr. Walthrop more blind and depending on Will Henry to take on the dirty work he does not want to acknowledge exist. This book is full of paranoia, unexpected twist, creepiness and unexpected reveals. Does Dr. Walthrop have his moment in the sun with the capture of T. Cerrejonensis? Does Will Henry escape with his soul intact and into the loving arms of his true love Lilly? Read and enjoy!!!! Cheers to Mr. Yancey for this wonderful, creepy ending to an outstanding series.

If you interested to see reviews of the other books in the series: 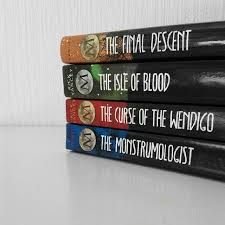 I also recommend very highly Mr. Yancey's new book in a series about an alien invasion that really rocks called "The 5th Wave." Hey I forgot to review that one!!!! Maybe next time.

Thank you Mr. Yancey once again for this excellent series. It was a great ride!!!!!!!!! 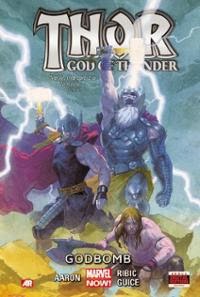 Thor: God of Thunder - Godbomb by Jason Aaron, Esad Ribic, Butch Guice and Tom Palmer - This Graphic Novel collects Thor: God of Thunder issues 6 - 11. Jason Arron has been on the comic book writing seen a good while now and let me tell ya kiddies, his a darn good writer that packs a punch when there is a tale to be told. This GN deals with a planet that is dying along with it's indigenous population. One of the aliens named Gorr prays to the Gods to save his family and people. None answer and as Gorr's family dies before him and he is cast out by his people he swears revenge against every so called god that has ever existed. One day great powers fall from the sky into his hands and he starts a crusade of fulfilling his revenge and so starts the downfall of beings calling themselves gods everywhere until Gorr runs across a race of gods that call themselves Asgardians. Gorr defeats the majority except Thor. Jumping through time and space Gorr must contend with 3 Gods of Thunder. One in his reckless and careless youth, one who serves with the Avengers and has a mighty sense of nobility and one who has grown old and crafty taking Odin's place as the All-Father. This is really a great story bringing together three very different versions of Thor at different ages against a genocidal alien who wants nothing more than to destroy any notion of the existence of gods. Great storytelling combined with awesome art make this one a must read!!!!!


Well until next time (hopefully alot sooner than between this post and the last),

Bill
Posted by Ninja Librarian Bill at 7:22 AM 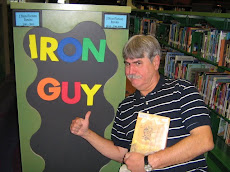